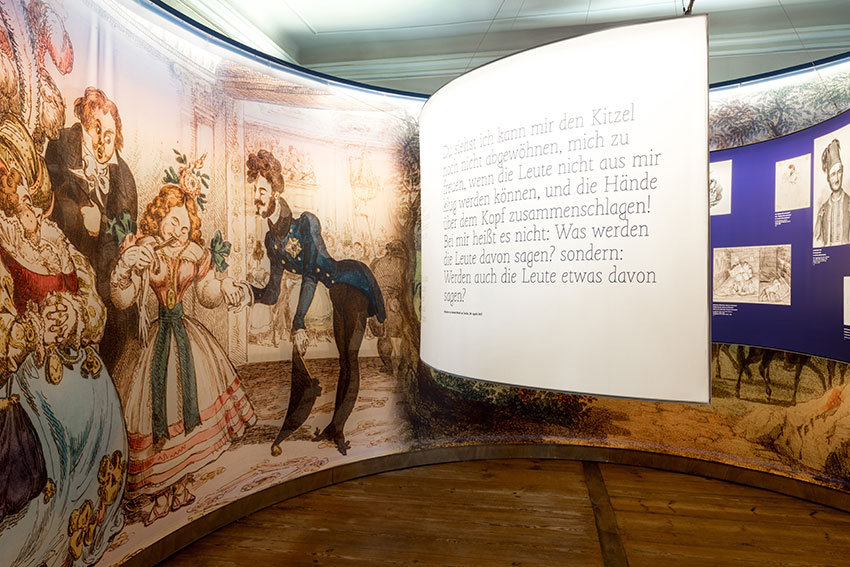 The permanent exhibition Prince Pückler. A European in Branitz provides interesting facts about the history of the mansion and its use and especially about the most prominent landlord, Hermann Prince of Pückler-Muskau, who lived here from 1846 until his death in 1871.

Eleven rooms on the main and upper floors provide answers to questions about the builder and the history of the building’s use, about the Prince’s ancestors and servants, about his background, biography and personality – and of course about the most important question: what was really his favourite ice cream? Furthermore, it takes a comprehensive look at Pückler – the traveller, garden architect, gourmet, writer and reader.

Unusual exhibits, such as the ‘hair from the mane of an elephant’, a travel souvenir Prince Pückler had presumably brought with him from Sudan, or even locks of hair of Prince and Princess Pückler can be seen alongside numerous other exhibits. Silverware shines in the princely Silver Chamber, and Prince Pückler’s Table Books, which can be viewed at a media station, provide an insight into who, when and what once ate at Pückler’s princely dinner table.

At another media station, you can read about Pückler’s role models and ideas for landscape architecture, as well as about other parks he helped to design, and learn that the designers of Central Park in New York largely adhered to Pückler’s book Hints on Landscape Gardening (Andeutungen über Landschaftsgärtnerei).

Any cookies that may not be particularly necessary for the website to function and is used specifically to collect user personal data via analytics, ads, other embedded contents are termed as non-necessary cookies. It is mandatory to procure user consent prior to running these cookies on your website.